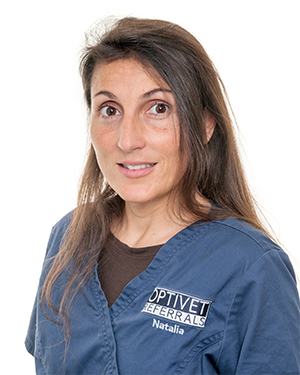 Originally from Barcelona, Spain, she completed Psychology studies between 1998 and 2004 at Barcelona University and Veterinary Medicine studies between 2002 and 2007 at the Autonomous University of Barcelona. She performed a 1 year general Veterinary Internship in 2008 and 3 years Residency Programme in Ophthalmology (ECVO) between 2009 and 2012. She attended The Basic Science Course in Raleigh, North Carolina, USA in 2012. Her research work during the residency programme was about intraocular fibrinolític activity. She became specialist in Ophthalmology ECVO Diplomate in May 2016. She moved to England in 2013. She has worked as staff Clinician in Ophthalmology at the Royal Veterinary College for 2 years and she joined Optivet Referrals in June 2015.