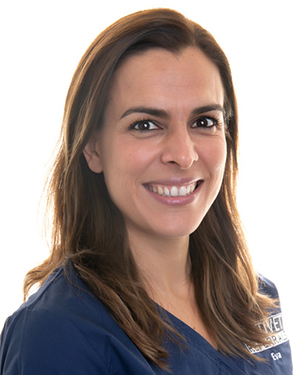 Eva graduated from the Universidad Complutense of Madrid (Spain) in 2000, where she also completed a PhD on the effects of different anaesthetic combinations in rats in 2004. In 2005 she moved to Canada to pursue a residency in anaesthesiology by the American College of Veterinary Anaesthesia and Analgesia (ACVAA) at the Ontario Veterinary College, University of Guelph, which she completed in 2008. During her residency she also completed a Doctor in Veterinary Science (DVSc) degree. After her residency, she became a staff anaesthesiologist at the Ontario Veterinary College during 2009 and became a Diplomate ACVAA that same year. In 2010, she moved to South Africa to join the Faculty of Veterinary Science of the University of Pretoria as a Senior Lecturer in Anaesthesia, until the end of 2012. In January 2013 she joined the University of Liverpool as a Senior Lecturer in Anaesthesia until August 2017, when she decided to leave the University to work in private referral practice. From December 2017 until August 2018 she was the Head of Anaesthesia at Anderson Moores Veterinary Specialist.

In September 2018 Eva joined Optivet Referrals as Clinical Director of Anaesthesia and Analgesia.

Eva still collaborates with the University of Liverpool, Universidad Autonoma of Barcelona and Universidad Complutense of Madrid doing CPD courses for veterinarians. She has written several book chapters in anaesthesia reference books, including the latest edition of the BSAVA manual of Canine and Feline Anaesthesia and Analgesia and the Veterinary Anesthesia and Analgesia: the 5th edition of Lumb and Jones. She also has several clinical research publications in peer reviewed journals. Her clinical interests include cardio-respiratory effects of anaesthesia, anaesthesia and critical care of septic patients and pain management.